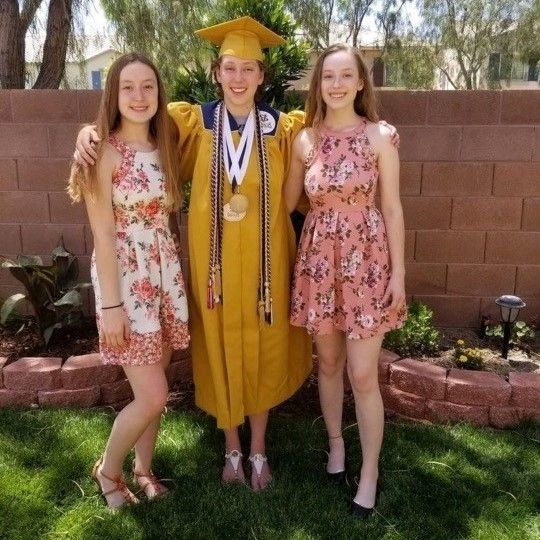 In 2017,our sister, Serena, was unexpectedly diagnosed with leukemia. Apparently that is the cancer of the blood. We didn't know then. She went in for a physical required by school in order to play sports. We found out she was within the earlier stage of it which put a positive outlook on the diagnosis.

Everything began to change almost immediately. One of our first steps was going with her to get her hair cut. We thought it would be too hard for her to see chunks of her own hair falling out. Her hair was very short after cutting and if some of the hair wasn’t cut, it most definitely fell out. Serena, being the positive sister she is, enjoyed the change in the haircut. Little moments like this helped us deal with our own emotions throughout her cancer journey.

There were hard times too though. It got harder when Serena began her chemo treatments which made her very weak and unable to do virtually anything for hours after she received them. It was hard to see our sister unable to do regular activities she was just doing regularly months previous. Things we never thought twice about before.

We had to change the way we did things around the house.

One major concern was germs. We would have to wear masks around her in our own home and we were constantly disinfecting our usual hangout spots at home. We didn't want to spread any germs. If she were to get sick then she might not be able to fight her cancer.

This also meant that for weeks at times we would have to refrain from hanging out with friends. Or on the rare occasion we were able to hang out we had to be very cautious to not be around anyone else that could possibly be sick. We always worried what would happen if we brought abck something Serena could not fight off.

We watched Serena go through various struggles throughout the course of her cancer journey. Impact to her physical health, mental health, and emotional wellbeing was happening right before our eyes. We knew we were doing all we could but we still felt helpless. .

I think one of the hardest things to watch was seeing the many physical changes which Serena experienced. They had happened so suddenly but, sudden became a prominent word in our household. The constant treatments transformed our sisters athletic build into a skinny figure that was not Serena. Her ankles becoming weak from laying down so often due to treatments. She couldn't walk for along without becoming winded. not being able to walk for long without getting out of breath, and getting tired much, much quicker than the rest of us.

However, the physical changes weren’t what shocked us the most. The emotional and mental changes were what had the most impact on me. Serena is known for being one of the strongest girls who you’ll ever meet. She could face one of the worst challenges and you’d still see Serena going strong and not letting it impact her. Even despite the struggles of cancer, Serena went through each day as if she wasn’t dealing with anything at all. She continued on with doing great in school and did what she could to to maintain a social life. There were times where Serena struggled with not having the ability to go out with friends with ease and being able to just enjoy life since her treatments and chemo really took a significant toll on her.

It really hit me that Serena had cancer when I went to visit her for the first time while she was in the hospital receiving treatment. Seeing Serena sleep for hours and being almost too weak to get up to use the restroom or eat, not having enough energy to do much social interacting like talking or laughing, and just seeing her laying there while being connected to various machines that contained many liquids which I never knew the names of. Those were probably the toughest times seeing her in the hospital and leaving her was even worse. Sometimes when we would just lay there chatting and she would open up to me and tell me about how almost nobody is maintaining contact with her now that she had cancer. Her friends had sent her good luck messages but oftentimes, she would go to their pages and see them hanging out together without her and it would significantly impact her. It made her very sad which made me very sad, too. It was hard seeing Serena struggling but I tried my best to make her okay for the times where she wasn't. I would wake up an hour earlier than usual just so I could spend an hour with her each morning before I left for school. I will never forget those mornings. Despite the situation, these were some of the best mornings.

Of course, battling cancer is not easy whatsoever, and we saw that through the 24/7 exhaust and pain that our sister went through. Support from organizations like Candlelighters made it so much easier to get through this challenging time. We had the amazing opportunity to go to Camp Independent Firefly and we ALL were able to go. Even my sister. We knew she needed that. This helped us escape the Las Vegas city life, and the thought of anything serious for a couple of days. When we went, it was so fun and full of happy memories. We finally found people we could relate to because often you do not find siblings of cancer survivors.

Serena's leukemia brought the family apart at times but we always came back together stronger than before.