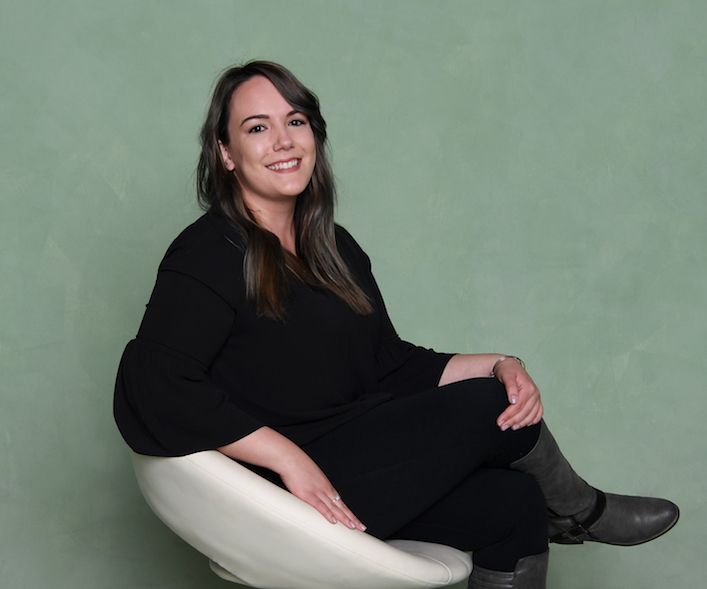 This is the story of Paula:

A cancer diagnosis at any age is a daunting prospect, but facing the disease and the side effects resulting from treatment are particularly challenging for teens. Twenty-seven-year-old Paula remembers her teenage cancer journey all too well.

“I was 15-years-old, a freshman in high school. Toward the end of my freshman year, I found a lump in my right armpit, probably about the size of a baseball. I didn’t think much of it, until one day I was in science class. In class, they were talking about mono – the kissing disease. And, I thought I had contracted something from sharing a Gatorade."

“I had the lump for about a month before I figured I should probably tell my mom about it. I was 15 and wasn’t thinking about cancer, but my mom was worried. She knew I hadn’t been sleeping much and she said we need to take you to the emergency room and told me to, ‘Act like it hurts.’ At the emergency room, I can remember the practitioners there asking me if I had a cat. They said your lymph nodes can swell if you get scratched or cut shaving. I hadn’t noticed a scratch or cut, but they figured I had an infection and gave me antibiotics."

“I took the antibiotics for two weeks. The day after I finished the antibiotics, I had spots all over my body. We went back to the ER to see what was wrong. I was allergic to the penicillin and the doctor asked to see the lump under my arm. He started running tests and did an ultrasound. The ultrasound came back and showed the lump was a cross between a cyst and a swollen lymph node. The lymph nodes in my chest were also enlarged. I saw a bunch of doctors that day and they all though that I had mono, too. Finally, Dr. Bernstein was called in and they did a bone marrow aspiration. Three days later, we got those results back and, of course, it wasn’t mono but the test was inconclusive. They had to go in and do a biopsy of the actual lump and once they got the results back, they knew I had Hodgkin’s lymphoma."

“I remember the doctor telling me I had cancer and I was in disbelief. I was waiting for him to stop talking, so I could say, ‘Are you sure?’ I didn’t feel sick. Here they were telling me, ‘You can’t go to school until you go through chemo and your hair is going to fall out.’ I was thinking to myself, ‘I need my hair.’ I was 15, my hair was important to me. That’s when I lost it and I started crying. Then they’re saying, ‘You’re going to need a port.’ I had tunnel vision. It was kind of like a movie. The doctor was talking in the background, but I couldn’t hear him. I was in another world. I just kept thinking, ‘What is he saying? I think he got the wrong person. I don’t feel sick, I don’t have cancer.’"

“I was just in shock. At 15, you don’t think about having cancer. But, looking back and because now I’ve done my research, I realize I had some symptoms. I did have a constant cough, a chronic cough. I had that for a long time before I found out I had cancer. I would cough when I would run. I would cough when I would laugh. I remember I got really sick one day and had a cold and the cough just stayed and never really went away. My skin was also very itchy. I would walk home from school and I would have to scratch all over. It’s one of the rarer symptoms of Hodgkin’s lymphoma. It was something that I looked into once I did research and realized it was part of my diagnosis. Once I started chemo, all of those symptoms went away immediately except the lump."

“Going through it, we knew it wasn’t life or death. We knew the chemo would get the job done. My life wasn’t at risk, but it was still rough on me. Physically, it affected me horribly. I had to stop going to school with a month or two left of my freshman year. Physically, if I had a good day, I was okay. But, if I had a bad day… I would wake up some days and I couldn’t eat anything. Bad days were really horrible."

“I lost all of my hair. I was always tired. I could hear my heartbeat when I would walk. It was really harsh on me. I was tired all the time. I couldn’t do much. When I’d have to walk longer from the house to the car, or parking lot to the hospital, it was almost like I forgot to do a normal task because I was so weak."

“My mom was a big help. My dad was the only one working, so he couldn’t always be there, but there wasn’t a night when my mom wasn’t there. She would keep me up laughing. The nurses and Candlelighters were all so positive, too. That helped a lot, and it kept my spirits up."

“When I was done with treatment, I was invited to Candlelighters’ Teen Scene. I was part of the first Teen Scene group. It was just me and three other kids; not the size of the group the program has today. I don’t think I missed one Teen Scene. It was all fun. We could be at the office painting or we could be at a show. It didn’t matter what we were doing, it was the people we were with. We were all pretty close."

“When I went back to high school, I felt like I became the ‘girl who had cancer.’ At Teen Scene, I was like any other teen. We all had that one thing that we went through. It was the hardest thing in our lives that brought us together and made us get closer and quick."

“Staying positive is really important. Everyone’s journey is so different, so there’s not one specific thing to say or advice to give. One thing I wish I would have done was not to have held on to my hair for so long. If I went back, the first thing I would do would be shave my head. At the time, I just would not shave it. Now, I would go back in time and shave it. I would just own it. I wish I would have been stronger about that. My advice to anyone and, particularly, another teen would just be to be brave about anything that you’re going through."

“Today, I work in healthcare and am a licensed optician. I still help with Candlelighters at camp, and they are part of my life. It’s been 12 years since I was diagnosed. It’s crazy how the time flies by, and you really can get through anything.”