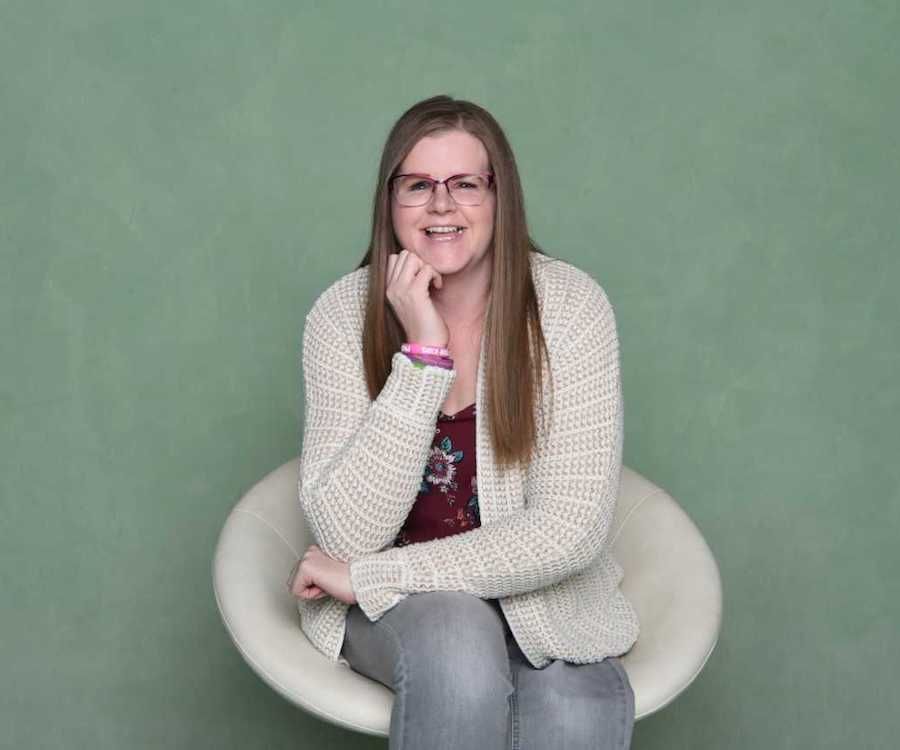 This is the story of Katie:

Sit down with Katie for just a few minutes, and you’ll find her zest for life is readily apparent. The plainspoken 31-year-old may at first appear unassuming, but carries within an indomitable spirit. She’ll tell you one of her biggest pet peeves is to be called an inspiration, asking, “What’s so inspirational about going out to get groceries? I’m just living my life.” But, perhaps, what Katie doesn’t see is that others are drawn toward her positive light.

Katie has never known a life without cancer: first, as a patient, then as a volunteer and, now, as a healthcare professional. Katie’s life has been spent fighting the disease, overcoming her cancer battle and helping others fight theirs. While Katie recently returned to Las Vegas, she has spent the entirety of her career in healthcare. Today, she works at Children’s Specialty Center and is continuing to grow professionally to help others. “I have always been part of this community, and I knew this is where I wanted to be,” says Katie.

It’s that positive light, passion for helping others, and ability to tap into her own patient experience that makes Katie the perfect fit for her role at the Center. Diagnosed with retinoblastoma at six months old, Katie knew from a young age that cancer would play a profound role in her life.

“I lost my eye at six months. I had chemo and radiation, and then I went into remission,” Katie says. “But, I grew up knowing what I had been through as a baby and that I would experience cancer again.

“Sure enough, at nine I was diagnosed with osteosarcoma. Because I had gone through it before and I had been prepped my whole life, when it came around the second time it wasn’t a huge surprise. It wasn’t out of the blue. I was only nine, but I was a part of all the decisions. My family didn’t make any decisions for me, and that made a huge difference in how I dealt with everything. At a certain point, it became a routine, and I just made up my mind that I was going to get through it. I was just running the race. It hurt really bad, but you just say to yourself, ‘I have to get through to the end.’”

Despite diligent efforts on the part of Katie’s mom to look for signs of cancer, which doctors suspected would return in her long bones, by the time Katie’s second diagnosis was discovered, the cancer had already spread into her lungs.

“I had chemo for six months before they decided to take the leg. The doctor had said to my mom and grandma; these are your options: she can keep her leg, but it might mean a lot of dead weight and a lot of ‘what if’s’ or she can lose the leg and have a prosthetic. It was laid out for me, and I was uncomfortable facing a really serious illness. I had that history. I was raised to know about it. I knew that having one leg was going to be a struggle. But, looking back on it, I’m glad that I was in control and that it was my decision. I would have been resentful of my family if they had made that decision for me.”

Katie recalls her time in the hospital making friends with other kids who were experiencing the same journey. “I remember having fun with my peers. They just weren’t in school; they were kids in the hospital. Candlelighters’ visits and activities, games, and movies were the best support. We made the best of it.”

Katie says she can recall Candlelighters’ support even before those much-anticipated hospital visits. “I became a Candlelighters kid in 1991. I qualified for the services because I was a survivor of my retinoblastoma as an infant. I have a unique perspective of Candlelighters having been a Candlelighters child, then in high school, a volunteer and then in my professional life. Candlelighters has grown so much, and I have been a part of its growth. The work that is done to support families, in every possible way – financially, emotionally, quality of life – is just tremendous.

“But, more than anything, it’s that emotional support. I can help replicate that support in what I do today. It’s important for someone who has been through it to tell these kids not to be afraid of what you’re facing. If you have questions, ask them. If you’re scared, tell someone. If you’re sad, tell someone. There are people that will support you in ways you didn’t know you could be supported. Mental health is just as important as your physical health, and there is a team that will support you no matter what. That’s what Candlelighters does.”

And, like Candlelighters, Katie is also determined to make a difference. Others who have experienced a journey like Katie’s might prefer to put those past experiences behind them; but Katie willingly shares her story to help support others, giving them strength to pull from her experiences. And, that is truly inspirational.