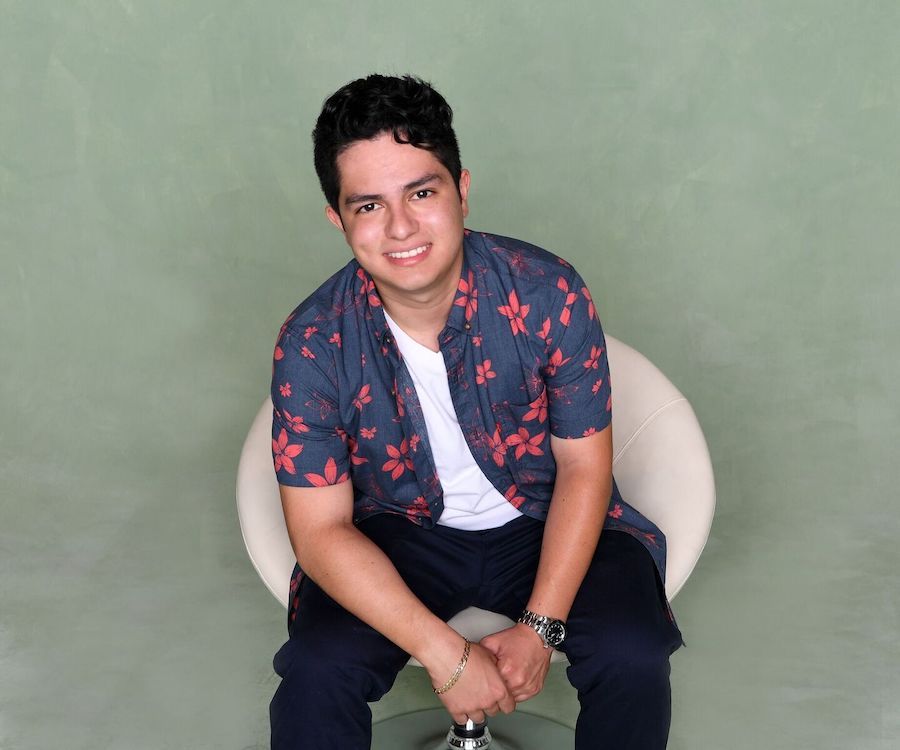 This is the story of Angel:

At 20-years-old, Arlet is proud of Angel’s accomplishments. He is kind and considerate of others, a loyal older brother, and incredibly hard-working. He works a fulltime job while attending CSN as a full-time student. Angel plans to pursue an engineering degree at UNLV because Arlet says, he wants to build solutions to help people with disabilities.

Arlet believes Angel’s early experience with adversity helped shape the man he has become today. But, her current outlook on their experience took years to take shape. Her initial reaction was one of fear and shock.

“Angel was two-and-a-half when he was diagnosed on January 24, 2001,” Arlet remembers. “We knew something was wrong because he was lethargic and didn’t want to walk and wasn’t being himself. He had violent fevers, and we took him to the doctor, and they would say he was fine and send him back home. Then he had petechiae, the little red spots. He woke up on a Saturday morning, and his face was swollen, and he had the dots on the back of his knees. I took him to Sunrise [Hospital], and they said it was probably just a virus and it would run its course. I felt something was not right; I didn’t want to accept that answer. On Saturday night, we came back home, and we were hoping and praying his fevers would go down and he would be his normal self. But, nothing changed, and we went back to the hospital on Sunday. They said for us to just go back home and that the doctor would see us the next day because they had drawn blood and we would then be able to see the results."

“That night, that Sunday night, my dad said to me, ‘Mija, I hope it’s not leukemia.’ I turned around and looked at him and said, ‘I don’t know what that is, Dad, but that sounds ugly and my son does not have that.’"

“His fevers continued to spike every three hours and I went back to the doctor’s office early Monday morning. They told me everything is fine, it’s just a virus but it looks like he’s anemic.

So, they said there is a specialist you should go see today. I thought, well it’s just anemia, and we can deal with this and was a little relieved. That afternoon, I drove him to the specialist and told the doctor and staff what was going on, and he did more bloodwork. The doctor came back into the room, and he said, ‘Honey, there isn’t an easy way to say this, but your son has cancer.’ The nurse was hugging me and Angel was hugging me because he didn’t understand why his mom was crying. I called my parents, I called my husband, and I told everybody Angel had cancer. I said to my dad, ‘How did you know he had cancer, he had exactly what you said last night.’"

“I don’t even know how I drove home. I just remember him saying what he said and all of a sudden, I was home, and I was packing. I was packing my bag and Angel’s bag, and we needed to go to Sunrise immediately. Everybody in my family had left their work to come home and help, but I couldn’t talk. Everybody was talking to me, and I was like a zombie. I said goodbye to everyone, and I left. I didn’t even wait for my husband. I just got in the car and drove with Angel and got him to Sunrise. He had ALL (acute lymphoblastic leukemia). He was high risk because he had the third delta chromosome. We were in the doctor’s office four times, five times a week. It was hardcore chemo. We did three-and-a-half years of chemo. It was really hard."

“I was so young and he was my only baby. I would ask Dr. Oseas all kinds of questions and he would spend a lot of time in the room with me, giving me hope and advice. I think he is the one that helped me cope the most. I kind of shut down after they first told us. And, to this day, I don’t remember half of it because I went into shock and forgot so many things. As a person, I did not cope with it very well and I needed to be strong."

“Angel was very little; he didn’t understand what was happening when we started treatment. He didn’t like it. He would cry a lot, and we would have to have five people holding him down to do anything to him. We would have to all hold him down to do bloodwork or anything. We don’t know where he got his strength. We would have to have the whole staff hold him down. When he was diagnosed, he was already talking at that age, but when he got sick, he stopped talking completely. He regressed. We had to do speech therapy to get him to talk again. We had a teacher come to teach him at home from the time he was three to five."

“He also had a hypoglycemic reaction to the chemotherapy. I remember he was really lethargic and I rushed him to Sunrise. The doctors couldn’t get him to wake up. We were in the ER, and it was the scariest thing. He had four doctors around him and none of them could figure out what was going on. I had all of his charts and documentation of the different medicines he was taking, and none of the doctors could figure out why he was in a comatose state. Then Angel’s doctor came in and asked if anyone had checked his sugars. His sugars had dropped below 40, and he had hypoglycemia as a side effect from the chemo. If they had gotten much lower, we’re not sure if they would have been able to bring him out of it."

“The one thing I can remember so clearly, I can even hear his voice, was Dr. Oseas giving me advice. He said, ‘It looks like you’re going through depression.’ And he said, ‘Honey, do you want your child to live? Then you will have to be the happiest woman in the world because sadness makes it so much harder. You have to love him and enjoy every minute of the day with him. If you want your child to live, you have to be happy. You cannot allow sadness to seep into your life.’ I gave that advice to my husband, and I tell others that have gone through this that same thing. Once he said that, I tried to live that way as much as possible, to love unconditionally and enjoy every single minute.”

Arlet took the advice to heart and gained strength from Angel. She also leaned on others, including Candlelighters, to help them through their journey. “Candlelighters was always there. It makes you feel like you’re not alone. That’s how I coped. I could see other families that were okay. And, I wasn’t alone. I always had my family, and they were there to back me up and take care of us.

“Candlelighters brought happiness to Angel when he was in the hospital. Candlelighters makes him feel like he wasn’t alone, that he had a family. He had a family he could turn to. He wasn’t an outcast, he has learned to accept who he is, he strives to be a hard worker and to fight his disabilities that he has to deal with in school."

“He tries really hard now to do different things because he sees how it helped him and he remembers. And, he wants to give back. His experience with cancer and with Candlelighters is just embedded in him. It’s made him who he is.”