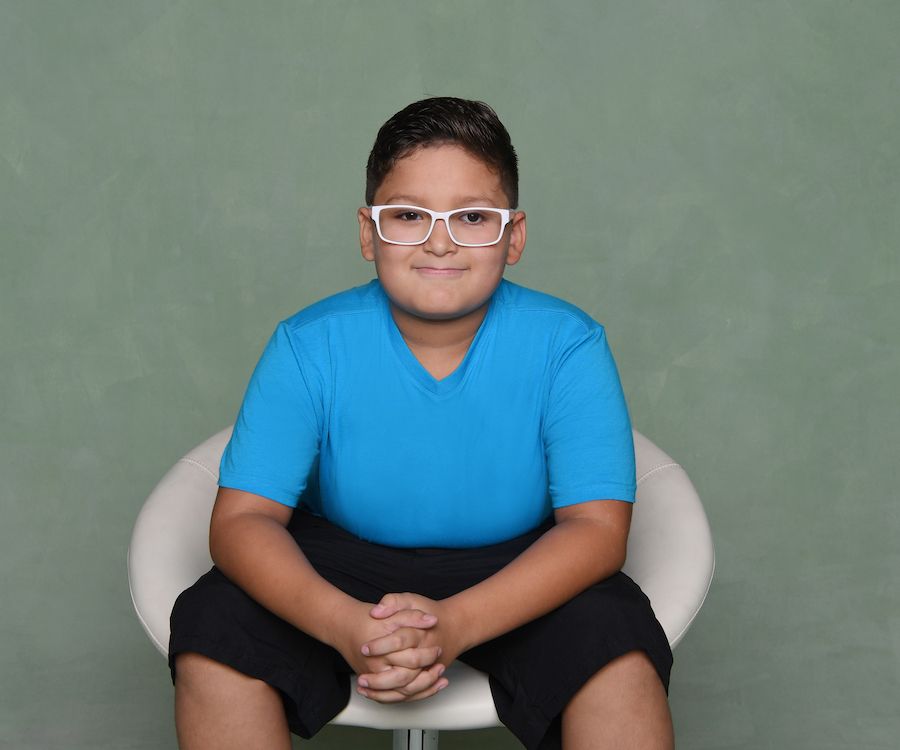 This is the story of Alvin.

“Cancer in our family has never been a good thing,” says Laura, remembering her son Alvin’s diagnosis.

In March of 2009, at just 10-and-a-half months old, Alvin was diagnosed with retinoblastoma in his left eye. Doctors decided it was best for Alvin’s eye to be removed before the cancer spread from the optic nerve into his brain.

Laura says she can recall when she and her husband first noticed something might be wrong. “One day I had Alvin on my bed, and I had the lights off in the bedroom, but the light in my bathroom was on. I saw a glare on his eye, and I thought there was something wrong. The next day, my husband noticed the eye that had a glare. It was bright like a mirror. He told me we should go to the pediatrician. I mentioned the glare to the pediatrician, and he sent us to an ophthalmologist. They went ahead and did some tests. A week later the test came back, and the ophthalmologist called me and told me we needed to go to Los Angeles, that there were only two doctors in the U.S. that specialized in what Alvin had. She said it looked like cancer, but we needed to get Alvin there as soon as possible before something worse happened. That same night, we drove to LA. We took Alvin to the doctor early the next day, and they put him through a lot of tests and confirmed it was cancer. It was the worst experience ever."

Alvin’s first surgery in April 2009 successfully removed the cancer, however; he has since had to have seven more surgeries to correct complications with his implant.

“He was really brave. He was happy after every surgery. It looked like he didn’t really know what was happening until around the age of five. This last surgery, when he was older, he was more scared and asked a lot of questions and didn’t want to have it done. When he was small, he was really, really brave. He would cry when we first took him to the doctor, but he got used to all the nurses and doctors. He was brave. He just saw them as normal people. He wasn’t scared that they’re going to ‘poke me or prod me.’ He had so many surgeries back-to-back when he was little that he became very familiarized with the doctors.”

Alvin's family credits Candlelighters with providing support throughout Alvin’s journey. “We found out about Candlelighters through the Make-A-Wish Foundation. They said they couldn’t help us with what we needed, but sent us to Candlelighters because they knew Candlelighters could help. Candlelighters helped us with just what we needed. The programs have been good and have helped us to not always think about the hard things happening. The events help us forget what we’ve gone through and it’s nice to know that there are people out there that do this stuff to help ease the pain.”

Today, Alvin is 10-years-old. He is much like any other 5th-grade student. He likes to play video games and soccer, go to the skate park, and play catch with his dad and brothers. As the third child of four boys in the family, he also likes being a big brother.

Laura says the most important thing that has carried them through Alvin’s journey is faith. “Have a lot of faith. Sometimes faith is the hardest thing because you’re mad at everything and asking, ‘Why my baby?’ But, it’s a long journey…as long as you have faith and your family and you know that your child is very strong, that makes everything better. You get strength from different places that you don’t think you have strength. Sometimes our kids show us that they are very brave and that gives us strength. Our kids show us that they are very, very strong and that gives us strength throughout everything.”

Like Candlelighters, you too can help make a difference in the lives of families facing a pediatric cancer diagnosis. Please consider joining Candlelighters shineGold Club. A monthly membership of just $40 can go a long way in contributing to the emotional, financial and quality of life services these local families need. To learn more visit www.candlelightersnv.org/donate.